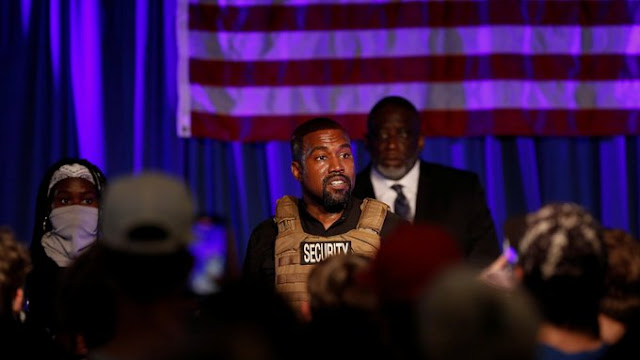 Kanye West is allowing himself to be used for the ratfucking of Joe Biden's campaign to restore democracy in America. We have normalized this sort of thing in the Trump era. Every dirty trick, every attempt to suppress the vote, and every possible tactic is being employed to steal the election. West is letting himself be dragged into this, although there have been indications that he is mentally ill and is being used as a pawn.

If he is being taken advantage of, then where is his family?

If he is serious about running for president, why now and why only in states that Trump needs to win in order to remain in office?

Does anyone think it will even work?

This is what's happening with the paperwork being filed to get West on the ballot in Wisconsin:

Clearly, they're just making things up. This is Ratfucking 101 - falsify everything, get the spoiler on the ballot.

I mean, this is what appears to be happening. We need to acknowledge that if it wasn't West then it would be someone else. What a disgrace.

A Deplorable by Any Other Name

Oh, look. The puke who used his money to spread filth about Hillary Clinton is now out of a gig:

According to a report in Upload VR, Palmer Luckey, the co-founder of Oculus and the Rift creator, is leaving the company which he sold to Facebook three years ago. This will allegedly be Luckey’s last week with the company. “Palmer will be dearly missed," a statement from Facebook read. "Palmer’s legacy extends far beyond Oculus. His inventive spirit helped kickstart the modern VR revolution and helped build an industry. We’re thankful for everything he did for Oculus and VR, and we wish him all the best.” The Daily Beast has reached out to Facebook to confirm this information.

Last September, The Daily Beast revealed that Luckey had been involved in funding a pro-Trump political organization called Nimble America, a self-described “social welfare 501(c)4 non-profit." It was intended for the purposes of shitposting about Hillary Clinton and circulating offensive memes about her. Luckey got involved in the project after meeting Milo Yiannopoulos. Shortly after the story, Luckey essentially disappeared and skipped the Oculus Connect (OC3) developer conference. He has kept a low profile over the past few months with no posts to his Twitter or Facebook accounts since September.

In this country, he gets to keep his money and go on about his business. In Russia, he would have been imprisoned for being mentally ill and corrupt months ago. That's how it works now. You can be wealthy, powerful, and do whatever you want without any consequences until the people you're working for decide that you're too much of a liability to keep around.

I love the part about how he amscrayed from social media, though. If you have such popular ideas, why not share them with the rest of us? Are you afraid that the marketplace of ideas is going to reject you?

Too late for that now.

This is an interesting photo. You can see the misery and panic in the eyes of this young woman. You can see that Marco Rubio is already saying a prayer every night that his male pattern baldness holds off for a little more than four more years. You can see that Trump has no idea what's happening, so he flashes a thumbs up because that's about all he can handle right now. Pence? Pence is lost, hopelessly lost, but the National Naval Observatory is much, much nicer than the Indiana governor's mansion, so his family probably isn't completely miserable right now.

It's a photo taken on the deck of the Titanic. The deck chairs are about to go sliding off into the ocean. Thumb's up! Freedom is just around the corner.

The Liberation of Kansas

At some point, a humanitarian mission to liberate the occupied territory known as Kansas will have to be undertaken by peacekeeping forces and by non-governmental organizations that will deliver human rights relief to a badly oppressed people.

Yes, Kansas is full of God-botherers who have no money, no jobs, no health care, dwindling access to education, fracked-out water supplies, no real quality of life to speak of, but they have Jeebus and Sam Brownback and his tax cuts for the wealthy and his failed state government and his promise to make God-bothering look like a trip to a dry well on a prairie filled with nothing.

What does it say about a country where this kind of thing can happen in the year of our bothered God 2015? People need jobs and basic necessities. We see state legislatures tie themselves up in knots trying to legislate against abortions that simply don't happen anymore and they call that good government.

If you live in Kansas, my heart goes out to you. My head wonders what the hell is the wrong with Kansas, but I am not without sympathy.
at February 11, 2015 No comments:

You would think someone would have taken Bill Cosby aside by now and said, "hey, you gotta disappear."

Is he really that defiant? Does he really think what's happened is going to just go away? On what planet does Bill Cosby get to skate on everything he's been accused of and just go back to wandering in and out of popular culture, making money and acting like nothing happened?

This is a man who cannot be advised of anything.
at February 06, 2015 No comments:

The Collapse of Bill Cosby


I sure hope Bill Cosby has been good with his money because when one in three people are turning in their tickets to your show for a refund, that's a pretty good indicator that your performing days are coming to a close.
at December 01, 2014 No comments: