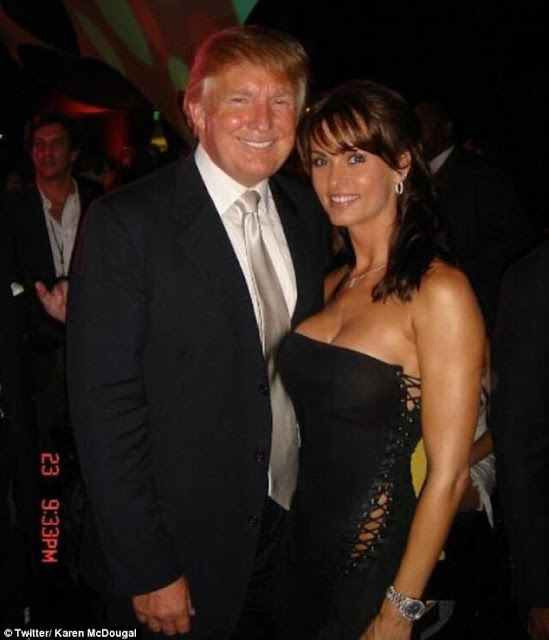 Probably Not a Good Idea to Be Seen With Trump

If you were hoping for a pause of the insanity of having a sitting president who is compromised by the Russians and can’t stop obstructing justice, then this is not your weekend.

Who in their right mind would be seen in public with Trump after the release of the Mueller Report? Well, now you have your answer—Rush Limbaugh, of course, and I suppose Sean Hannity and Lou Dobbs are wondering what they did wrong.

To mount a full-throated defense of the indefensible is to divorce yourself from facts and reality with regards to Trump. Your garden variety publicist would be of two minds here—one, you could avoid the most toxic figure in America and maintain a low profile. Two, you could be seen as supportive and friendly, but risk being tarnished by association.

Whoever advised golfer Lexi Thompson to appear in a photograph with this president and one of the most venal conservatives in American history should be fired:

It’s a fact that Trump and Limbaugh have larger breasts than this young, athletic woman. I’m not sure what kind of a hot take that is, but it is factually correct.

The cult of Trump is all in, baby, all in. They don’t care what “voters” think because they know their Russian friends can bail them out of tight races. They don’t care what the serfs have to say about a damned thing. They have one constituency, and it’s a pitifully small group of oligarchs in Russia and the United States who are going to spend the next twenty-one months on this Earth stealing everything that they can get their hands on.

I had a bunch of tubby jokes, but fat shaming these men is impossible.

They don’t know what shame is anymore. They blunder through life, fucking everything up, and they can’t be bothered with how it looks. Someone else will repair the ruins. They know a Democrat will be elected in 2020, and that president will spend 8 years fixing everything they’ve broken. And then we’ll do it all over again because Americans never seem to learn the truth about Republicans, do they?

Healthcare, How Does it Work?

Everything Trump says or does can be boiled down to a single concept:

If Insane Clown Posse were president right now, we wouldn't be having this discussion because at least those idiots know what they don't know.

Not only does the president have time to golf, he has time to crash weddings. Someone needs the help this guy find a hobby or something. When people ask you if you're tired of winning, this is what they mean.

Given everything that has gone wrong for the President over the last 48 hours, you'd think he would be trying to change the narrative, find a solution to the mess he's created for himself, and reach out to his allies so that he can unify his message to the American people.

The 25th Amendment to the Constitution is a beautiful thing, but it has to be studied and put into action. Trump needs to be medically examined by physicians at Walter Reed National Military Medical Center immediately.

It's impossible to keep up with this asshole:

Donald Trump asked a woman with a crying baby to leave his rally in Ashburn, Virginia on Tuesday.

Trump then returned to his non-baby-related remarks, only to hear the baby make more noise.

“They have ripped us to shreds, ripped us absolutely to shreds," Trump said of China, before turning back to the woman with the child.

“Actually, I was only kidding, you can get the baby out of here," the Republican nominee said to laughter and applause. "That’s all right. Don’t worry. I, I think she really believed me that I love having a baby crying while I’m speaking. That’s OK. People don’t understand. That’s OK."

No word on whether or not Trump's thugs roughed up the mother or took any candy from the baby.