Keep Your Kids Away From Jerry and Becki Falwell 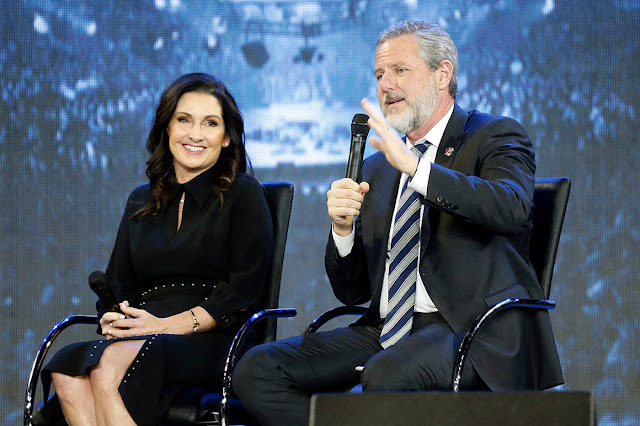 These people are freaky and should not be around anyone's kids:


A former Liberty University student says Becki Falwell, the wife of the university’s then-President Jerry Falwell Jr., jumped into bed with him and performed oral sex on him while he stayed over at the Falwell home after a band practice with her eldest son in 2008.

The student was 22 at the time of the encounter, near the start of Liberty’s fall semester. He said she initiated the act, and he went along with it. But despite his rejection of further advances, he said, Falwell continued pursuing him, offering him gifts and engaging in banter through Facebook messages.

“She was the aggressor,” he said.

The messages, screenshots of which were provided by the former student to POLITICO, suggest a flirtatious relationship that went beyond what might be expected of a mother communicating with her son’s bandmate.


Life in the Falwell household seems like one of the bad sequels to American Pie but with worse hair, more sex and fewer ethical quandaries. How is it that these people are still able to hold onto all of the money they took from the university that Jerry Falwell senior founded as a way of indoctrinating the youth of America into his bizarre version of a religious and righteous America?

I have to admit that I've always been immune to being shamed by someone else's grasp of "family values." I remember when that was a thing in the late 1980s and early 1990s. It was as if hypocrites were running things and it turns out they were.

Stormy Daniels is Not a Stupid Person

We have been conditioned to think that the blonde in question is an idiot. That does not seem to be the case:

Stormy Daniels [Stephanie Clifford] can't get her story straight. Or maybe she can but chooses not to.

The pornographic film director and actress issued a signed statement Tuesday in which she once again denied having an affair with Donald Trump in 2006. Then, in a bizarre twist, she cast doubt on the authenticity of the statement hours later in an interview with late-night comedian Jimmy Kimmel.

Kimmel noted that Daniels's signature on the statement appeared different from her previous signatures.

“Did you sign this letter that was released today?” Kimmel asked.

“I don't know. Did I?” Daniels replied. “That does not look like my signature, does it?”

Wait. What? Of course Daniels knows whether she signed the statement. After the Kimmel interview, Daniels's spokeswoman, Gina Rodriguez, told The Washington Post that she and an attorney witnessed Daniels sign the document Tuesday afternoon.

Why would she do that? Here's a theory: Daniels is trying to tell us, through winks and nudges, that she did have sex with the future president, even as she officially denies an affair.

Daniels said in her statement Tuesday that she was not “paid ‘hush money,’ as has been reported in overseas-owned tabloids.” That was a backhanded reference to a report by the Wall Street Journal that Daniels accepted $130,000 to keep quiet during the 2016 presidential race. (For the record, Journal owner Rupert Murdoch is Australian-born but is a U.S. citizen, and the paper is not tabloid-size.)

Of course, all someone has to do is step forward with a penalty check--probably a little larger than $130K--and then double it so that Miss Clifford (her real last name) can come clean about what went on, but who's going to do that?

She knows that no one will help her. No one will do that. So, why not cash in?

We are being manipulated, of course. We're being led around by a woman who understands that men are stupid because they will spend untold amounts of money to be in her presence and buy the products she sells (beyond movies, she is an entrepreneur who sells access to the content she creates and to the sex toys that she endorses). She knows that the focus is on her looks and her line of work. This is smart because she is in the process of enriching herself despite what the country is doing to itself. She's more of a Republican than Trump, for crying out loud.

But what's really troubling is that this has not crippled Trump politically. Lesser sex scandals in size and scope (he had a relationship with her for about a year, in case you have forgotten) have sunk Democrats. For someone like Trump, of course not. This is who he is. He's a serial philanderer who doesn't care what anyone thinks of him. He makes hypocrites out of every follower.

I may be in the minority, but if Clifford had come out with her story in late 2016, it wouldn't have made a difference. It might have even helped Trump with the asshole contingent that voted for him. Certainly nothing he does is hurting him with evangelicals and Nazis.


Note the title of Kevin Williamson's attempt to defend the bigotry laws of Indiana. And, also note that he gets everything wrong right away:

There are three problems with rewarding those who use accusations of bigotry as a political cudgel. First, those who seek to protect religious liberties are not bigots, and going along with false accusations that they are makes one a party to a lie. Second, it is an excellent way to lose political contests, since there is almost nothing — up to and including requiring algebra classes — that the Left will not denounce as bigotry. Third, and related, it encourages those who cynically deploy accusations of bigotry for their own political ends.

So, the left uses bigotry, correct? Well, why do Republicans use national security in exactly the same manner to bludgeon their opponents into submission?

No one declared war on the private mind or the private beliefs of the people of Indiana. War was declared on the very public and commercial use of denying basic services to people based on their sexual orientation. This became an issue because Indiana law attempted to deny basic services to people based on sexual orientation in exactly the same manner as was done to people of color forty years ago (which the National Review defended as a matter of course in the 1960s).

No one is telling people what to think. They are being politely reminded that discrimination is anti-American and against the American way of life.

Can someone tell me what the fuck is he on about with regards to algebra? I am afraid the poor man is shivering in his own cloak of ignorance, afraid of his own shadow, and desperately hoping old William F. Buckley will show up and denounce that queer Gore Vidal.

You see, it's against the law to discriminate against people. Case closed, motherfuckers. Case closed.
at April 02, 2015 No comments:

America Will Never Be Rid of the Palins

When things like this happen, all you can do is wish the best for the lucky couple and imagine what the next few years are like, what with the death of irony and the elimination of self-respect from American political discourse.

The Palins are forever and you're just living in their world.
at March 14, 2015 No comments:

Did Pat Robertson get on television again by appearing on the network that he owns?

Did he say something designed to make liberals crazy that someone wrote for him because they are part of a massive conservative movement to troll everyone through the method of sticking nutty things in an old man's mouth because he can make them plausible enough to scare old ladies into sending him checks?

It's March 2, 2015. Korean War hero Pat Robertson is still bugfuck crazy and on the television network that he owns.
at March 02, 2015 No comments: