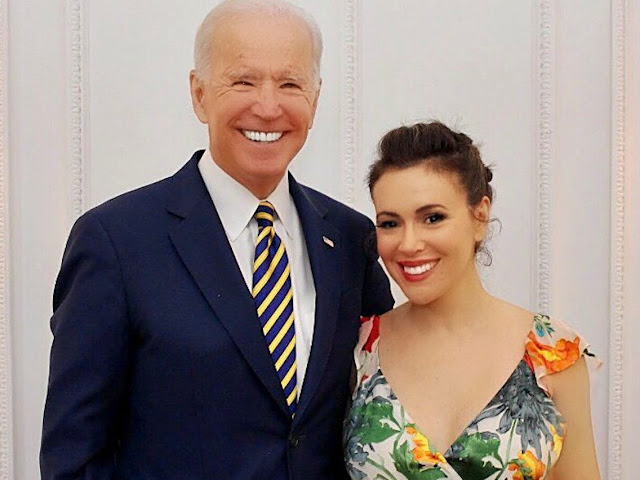 Chances are, you live in a part of the country where Alyssa Milano has brought her efforts to find social justice. She is a celebrity activist of the highest order, and she makes Republicans absolutely batshit crazy:


The real reason the right-wing activists seemingly have a case of Milano-derangement syndrome is because she does what they fear the most. She learns about issues, hugs and wrestles with ideas until she forms her own opinions that are untethered to dogma, and then she confidently speaks her mind. She doesn’t shy away from her power, but she does not avoid being vulnerable. Most of all, Milano grounds her arguments in facts and insight rather than conspiracy theories and innuendo. Alyssa Milano is the kind of citizen-activist who embraces the complexity of not only the “what” part of our political debates, but also the “why” behind them.

The fact is, Milano frustrates her critics because, despite her celebrity status, she is real. Like much of America, she is sometimes angry. Other times she is optimistic. She is on a quest to learn how to change the world for the better, and then she takes her best shot at making it happen. Her detractors might lament the so called “fake news,” but as hard as they try to paint her as a fraud, there is nothing fake about Alysa Milano. She is real, she is ready, and she is relentless. And to those who constantly attack her, that’s not a lie.

I think there is more to this than simply being real. To have a substantive impact on issues, you have to advocate for them in a relentless manner in this day and age. It's not enough to Tweet a few times at a problem and Milano usually does more than just parachute in and adopt a cause. She will put her feet on the ground.

It was a shock, not too long ago, to have her in San Antonio, for example. There was no real compelling reason for her to be at the Greyhound bus station and no celebrity project to promote. She showed up there in order to take up the plight of the thousands of people being dumped at the bus station by the Trump regime. They were handing detained immigrants a ticket and they were unloading them onto the kindness and generosity of the people of San Antonio. This, in turn, overwhelmed the social services and charities that were trying to assist immigrants on their journey to legal status.


"Just went to St. Mary's Greyhound Station in San Antonio," she shared with her fans and followers on Dec. 11. "This is where ICE drops off asylum seekers when they're released from detention. @RAICESTEXAS volunteers help 60 families a day to make sure they have the ability to get to their destination."

Milano showed up and did what she could to help. That lack of hypocrisy is what animates the right wing. They know they are the real hypocrites and when they see a high profile person who does not have that same level of conflict of interest, they know they have to tear them down.