The Kids in the Hall Are Back 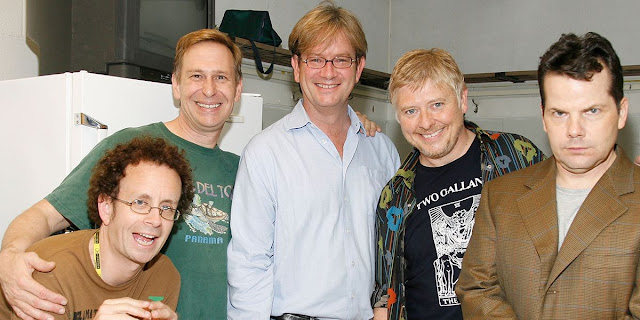 This is somewhere around the seventh or eighth reunion of the Kids in the Hall, so don't call it a comeback:


Amazon Prime Video is making a new eight-episode continuation of the original 1989 sketch comedy series, and yes, all of the original Canadian cast members will return. Dave Foley, Kevin McDonald, Bruce McCulloch, Mark McKinney and Scott Thompson will be reprising some of their original fan-favorite characters as well as playing some brand new ones.

"Even after 30 years, 'The Kids in the Hall' has retained its brilliance and originality," said Michaels. "We are happy to be bringing back all of the original 'Kids' for the new series."

"We've been investing in Canada for several years and are excited to add to that momentum by making The Kids in the Hall the first Canadian Amazon Original series," said James Farrell, vice president of international originals for Amazon Studios.

Lorne Michaels is a bloodsucking vampire, and I would have to imagine, since I don't know anything about show business, that he's keeping 90% of the money from this and that's wrong. If this thing makes Amazon a lot of money, I guess I'll keep Prime but, really, the porch pirate thing is out of control.

Let's say, for example, I order the DVD set that has all the episodes of the classic series. Yeah, I'll rifle through those if it makes it to my door, but what's more likely is that someone is going to drive up in one of those vans with the blue letters on the side and they're going to toss a padded envelope with the wrong goddamned version of Trailer Park Boys in it onto the front porch and drive away. I hate that shit. What's up with the guy with the fake glasses? Isn't there a law against portraying disabled people in a negative way?

While my bad attitude takes over, up from the darkness, a lone figure, a guy in sweatpants and a jean jacket, is going to wave his flashlight around my front yard, grab the package, and give his buddy Jake the signal to start the car so they can beat it out of here. I'm not getting involved in any of that shit. Take it, take it and go, you probably need the laughs more than me, jean jacket guy.

As a matter of fact, to hell with all this. I'm still smarting from something that went wrong years ago and I'm not about to get invested in something that allows Lorne to buy another house in the Hamptons, wherever that is, man.
at March 06, 2020